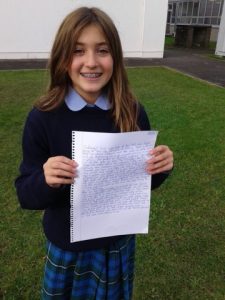 Laura Delgado is from Spain and she recently attended Our Lady’s Bower Secondary School for 8 weeks as a first year student. Here Laura gives us an account of one of her favourite trips while in Ireland.

Our trip to Galway was one of the best ones so far. Before going into Galway city, we first went to Athenry Heritage Centre. There a woman told us all about Ireland’s past. She then gave us some costumes to try on and we dressed up as Kings, Queens, warriors, princesses, and knights. She guided us through the castle. One place she brought us to which I particularly enjoying was the dungeon. There she showed us the different weapons they used to torture the thief’s, criminals, liars, and she also showed us how they used them.

I found a lot of the weapons were very cruel and savage. So, people who lived in the middle age kingdom, really needed to listen, and do what they had been told to avoid getting locked up and tortured.

After that, we went outside to practice some archery. We split ourselves into two different teams; The dragons and the knights, this battle ended with the dragon’s victory. We then got back onto the bus and continued on to Galway

After approximately an hour we arrived, we had lunch near a wild cold river. Laura showed us which street we were going to be on and allowed us some time to have a look around. The street was crowded and music invaded every corner. Watching people dancing, playing their instrument, or showing different talents made me feel happy. It really made me want to spend more time there on that joyful street. When it was time to leave we were all exhausted after walking up and down and having a look in EVERY shop. The trip to Galway was short but great and we all looked forward to next Saturday to arrive and to discover where that would take us.