The Gaelic Athletic Association known as GAA is Irelands largest sporting organisation. It is part of the Irish culture and plays an influential role in Irish society. It was founded on November 1st 1884 at a meeting in Thurles, Co. Tipperary by a group of Irish men. Within six months of that famous meeting, GAA clubs began 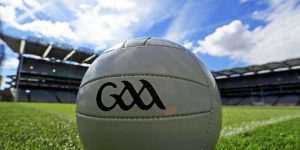 to spring up all over Ireland and people began to play games and took part in athletic events with pride. The association today promotes Gaelic games such as Hurling, Football, Handball and Rounders. The GAA works with sister organisations to promote Camogie and Ladies Football. It also promotes Irish music, dance and song and the Irish language is an important part of its aims. The GAA club has over 2200 clubs in all 32 counties of Ireland.

Gaelic Football is the most popular of the Gaelic games and is played by a team of fifteen on a rectangular shaped pitch with H-shaped goals at each end. The game is played with a round ball, slightly smaller than a soccer ball. Both hands and feet are used to control and pass the ball. The aim of the game is to score by driving the ball through or across the bar of the goals. If the ball goes under the bar this is three points for the team and if the ball goes over the bar this is one point for the team. 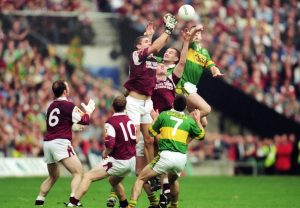 About Gaelic Football The ball can be carried in the hand for a distance of four steps and can be kicked or ‘hand-passed’. This is a striking movement with the fist. After every four steps the ball must be passed or ‘solo-ed’. This is the action of dropping the ball onto the foot and kicking it back into the hand. You may not bounce the ball twice in a row. Physical contact is allowed shoulder to shoulder. Players advance the football up the field towards the opposite goals through a combination of carrying, kicking, bouncing, hand passing and soloing. A goal is signalled by raising a green flag placed to the left of the goal. A point is signalled by raising a white flag placed to the right of the goal.

Facts about Gaelic Football Croke Park is a Gaelic games stadium located in Dublin often referred to as Croker by GAA fans and locals. It is both the principle stadium and headquarters of the Gaelic Athletic Association. It also hosts concerts from time to time.The game is said to have come from ancient Irish football known as Caid which dates way back to 1537 although the modern game took shape in 1887. It is the most popular sport in Ireland in terms of attendance and the final of the all-Ireland Senior Championship held yearly at Croke Park draws in a crowd of more than 80,000 people. The female version of Ladies Gaelic football is very similar to the men’s with a few minor changes to the rules. 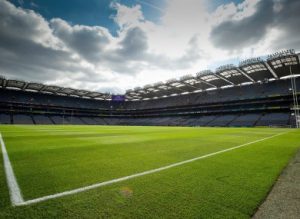