Halloween originated in Ireland. It comes from the ancient Celtic festival Samhain which is pronounced sow- in. This is old Irish and means end of summer. The 1stof November became known as- All Saints or All hallows day which was a day to honour for all the saints and martyrs. This resulted in the night before being called All- hallow-eve which later became known as Halloween. 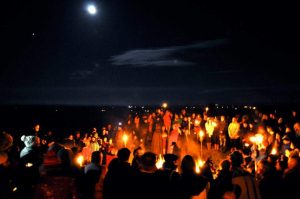 The Samhain festival was an important fire festival that is celebrated over the evening of 31stOctober and throughout the following day. Due to how the Celtic calendar worked, Samhain went from sundown on 31st October  to sundown on the 1st November. This festival is believed to be over 2000 years old and is said to mark the ending of the summer and the beginning of winter months.

The Celts believed that during this festival spirits could possibly pass between two worlds on this night. This was essentially believed to be the last day of the year and was a time when the souls of the dead would return to their former homes  and spirits would be set free from other worlds and would become visible to mankind.

During this festival the crops would be gathered and stored somewhere safe for the winter. Animals would be brought in from the fields. Holy water was placed on 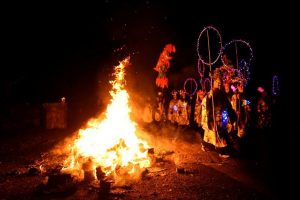 farm animals to keep them safe during the night. People would deliberately make a lot of noise in a bid to unsettle spirits and force them away. The timid and more shy would rather leave food out in their homes hoping that their kindness would pacify them. For some the ritual of leaving food and a spoon out- which was usually a plate of champ or colcannon was instead about offering hospitality to their own ancestors.

While some beliefs and traditions are a thing of the past some still remain a part of our Halloween celebrations to date.

A tradition that still remains is dress up at Halloween which came from this festival. People would wear ugly masks, animal skin and various disguises in an attempt to protect themselves against evil spirits roaming around and to prevent the dead from recognising individuals. 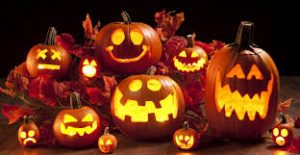 Many households particularly those with children, still leave out a pumpkin and enjoy the activity of scooping out the inside and carving a face onto it. However, this carving dates back to the 18th century and the idea started with a turnip. An Irish black smith named Jack plotted with the devil and was refused entry into heaven. He was sentenced to wander the earth but requested that the devil give him some light. He was given a burning coal ember which Jack placed into a turnip that he had gouged out himself. Thus the tradition of Jack Lanterns was born, the wandering blacksmith. Villagers in Ireland hoped light in their window would keep Jack away. However, when the Irish emigrated to America in their millions there was not a great supply of turnips so pumpkins were used instead.

Snap apple is a common party game to this day. An apple is suspended on a piece of string. The children are blindfolded and try to bite the apple. The child that manages the biggest bite first receives a prize.

Bonfires are traditions that still occur. People used to light bonfires in an attempt to ward off bad spirits and guide good spirits. The idea behind lighting a bonfire was to encourage dreams of who your future wife or husband was going to be. The person would drop a cutting of their hair into the bonfire and then dream of their future loved one. 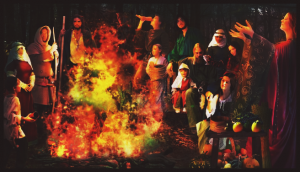